Last week, while in the midst of teaching a lesson on cuboids, I quickly realised that I had to do something drastic to get the attention of my most easily distracted student. I mean, there I was feeling all proud of myself for having everything I needed, I had my examples and non-examples for the students to handle, observe and compare attributes. My classroom was buzzing with excitement; hands were fervently flying up during Q & A time as I selected students to answer questions.

But the hand that I was looking for at the front corner of the class never went up. Justin (let’s call him Justin) just sat there looking away from me, tapping his ruler on the desk. Then he poked another student with his pencil. Now, it is not uncommon for him to be like this because he sometimes gets into trouble in order to avoid class work. What I needed to do was to get his attention without halting the momentum that the other students were having. At that moment, an idea popped into my head. 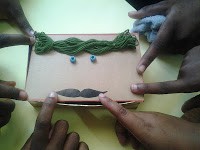 I walked out of the room, spun around and returned with a silly grin and a cuboid net in my hand. I didn’t say a word. I just slowly folded the net into a talking cuboid (like a puppet). Think of a box with the top lid open – that flap became the puppet’s mouth. Anyway, I used the silliest voice I could muster and made the puppet talk.

He introduced himself as Corey the Cuboid and went on to talk about his other siblings and the fact that he feels like the odd one out because he cannot roll like the cylinder or sphere and he’s not as cute as his brother the cube. My fourth grade students were wide eyed and everybody was paying attention – not to me the teacher, but to the cuboid on show.

They all wanted to have their turn with handling Corey the Cuboid and making him talk (including Justin). In fact, they had so much fun making him talk that I videotaped one of my students as she brought Corey to life!

I really enjoyed that cuboid net lesson and it taught me that even with a lot of planning, a touch of spontaneity keeps things interesting. The lesson gave me an idea for their math project – to have them put on their own puppet show featuring different talking 3D Shapes.

If you like the idea of having students create puppets from 3D shapes, feel free to use the patterns from this free assortment of 3D shape nets that I created to save yourself some time! And don’t forget to flip out and be just a tad spontaneous!

Nyla Phillips-Martin, is a young wife, mother, and teacher in the Caribbean. She has a B. Ed Degree in Primary Education and is in her seventh year of teaching. She hopes to show other teachers in her country the power of using technology for use in records, planning and especially in the classroom. To her, education is all about fostering creativity and facilitating hands-on learning. Visit Nyla’s blog, Nyla’s Crafty Teaching, for more engaging lesson ideas!