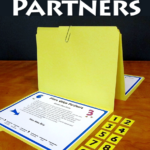 Place Value Partners is a place value game for math centers, cooperative learning partners, small guided math groups, or even whole class instruction. The concept is similar to the game Battleship with partners facing each other across a barrier. Instead of ships and a grid, they have a place value game board and number tiles or number cards. One partner is the “Sender” who calls out the numbers and places, and the other is the “Receiver” who listens and builds the number on his or her game board. The two players compare boards, discuss the correct response, and then record various forms of the number in their journals or on a recording page. This activity includes five different variations: three levels for whole numbers and two levels for decimals.

Common Core or Not Common Core? Have It Your Way!
Place value terminology is different in the Common Core Standards, so I created a Traditional Version and a CCSS Version of this game. Both versions include color and black and white printables although the preview below only shows the color version of the CCSS game. All files are zipped into one folder and are included with the purchase of this product. It’s a large file, so be patient when downloading it.