How to Introduce Decimals with Base Ten Blocks 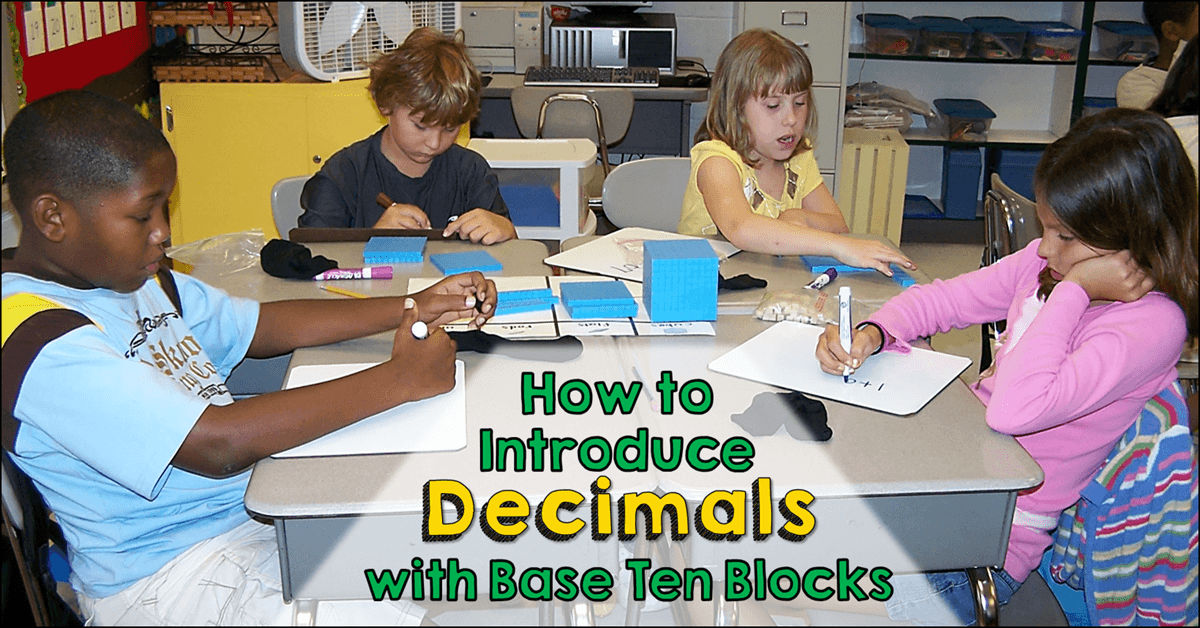 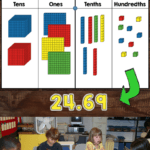 Whether you’re introducing whole number concepts or decimal place value, it’s important to start at the concrete level, and base 10 blocks work perfectly because they are sized according to their value.

Even 5th graders aren’t too old for base 10 blocks. Primary teachers often use them to introduce whole numbers, but base 10 blocks are also effective with upper elementary students when exploring decimals. Kids have to understand that each place to the left is 10 times the size of the place to the right, and base 10 blocks are the best way to explore that concept. Be sure to download the freebie that goes with this lesson!

How to Introduce Decimals, Step by Step

When introducing decimals, you can use the cubes to represent tens, the flats to represent ones, the rods for tenths, and the units for hundredths. I found that it’s really important to create a place value mat (like the one shown above) for these lessons because it helps students remember what place is represented by each model. To create mats like the ones I used in my lesson, draw the 4-column chart above on a large sheet of heavy paper (18″ x 24″) and laminate it. Use a dry erase marker to draw a decimal point between the ones place and the tenths place. Or you can print the patterns in my Build a Number freebie to create the place value mat on 2 sheets of 8.5″ by 11″ paper. 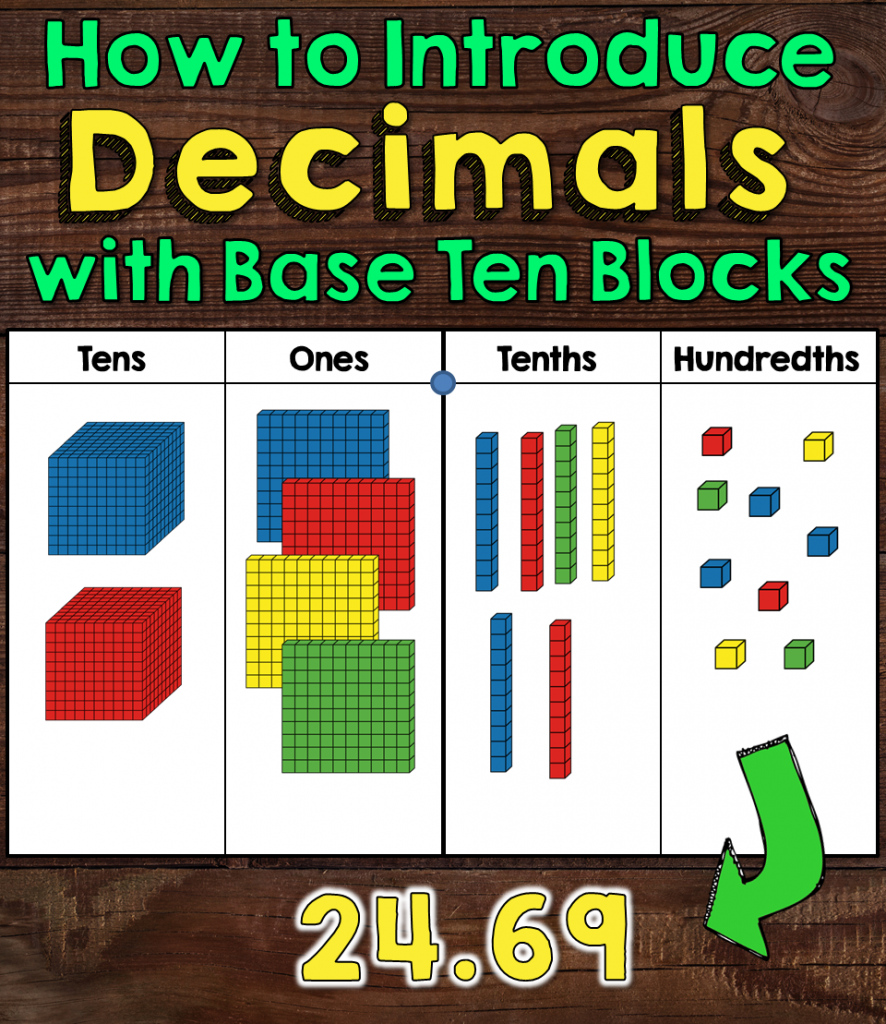 Seat your students in teams of four and give each team one set of base 10 manipulatives. It’s best if each student has a dry erase board and marker, too. Ask your students to divide up the materials so that one person has the cubes, one has the flats, one has the rods, and one has the units. Introduce each piece and explain how it represents a particular decimal place. I explained that even though they had been taught that the “flat” was equal to 100, I wanted them to think of it as one whole… maybe one whole cake for a family of mice! If they sliced the cake into 10 parts, each part was 1/10 or 0.1. If they cut those 10 slices into 10 parts, each part was 1/100 or 0.01 of the whole. 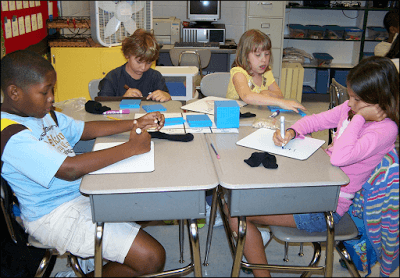 After you introduce the value of each base 10 piece, guide your students through an activity I call “Build a Decimal.” Start by writing a decimal in standard form on the board and asking students work to with their teams to “build” that number on the team mat. You can make up your own numbers or use the Build a Decimal Task Cards provided in the freebie. After you check to be sure they represented the number properly on the mat, ask students to write the word name and expanded form. 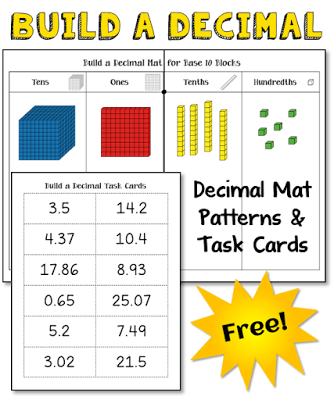 Expanded form is particularly difficult when representing decimals, and using base 10 manipulatives seems to help illustrate the concept. For example, it’s easy to see that the number on the mat can be written as 20 + 4 + 0.6 + 0.09 because students can see each place represented with physical objects. The expanded form of this number could also be expressed as 20 + 4 + 6/10 + 9/100 or completely broken down to 20 + 4 + 6 x (1/10) + 9 x (1/100). All of those ways to express decimals are much more easily viewed when looking at a mat such as the one below. Students can also see that each place to the left is 10 times greater than the one on its right.

As with most math concepts, it’s not enough to introduce them with hands-on materials and then move on to the next lesson. Kids have to practice the terminology and work with the concepts until they are fluent with them. That’s where math games come in handy. These four place value games are included in my Place Value Games Bundle, which is great for 4th and 5th grade. My students enjoyed all of these activities, and they perfect for math centers and small group instruction. 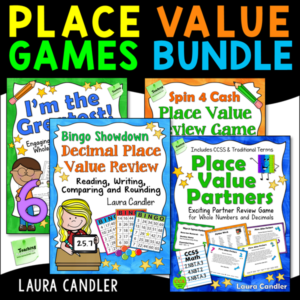 Place Value Partners Game
CCSS 2.NBT.A.3, 4.NBT.2, and 5.NBT.A.3
Place Value Partners is my most popular game for reviewing whole number and/or decimal place value. It’s similar to Battleship, but students use a game board with lines for placing numbers and number cards instead of ships and a coordinate grid. See the image below to understand how the game is set up and played. The Sender calls out each digit, one at a time, and tells the Receiver where to place them. When all the numbers are in place, they compare their game boards, check the final number and write its standard form, word name, and expanded form in their math journals or on a recording page. The packet shown here includes four different variations of the game board to include everything from 4-digit whole numbers to decimals. 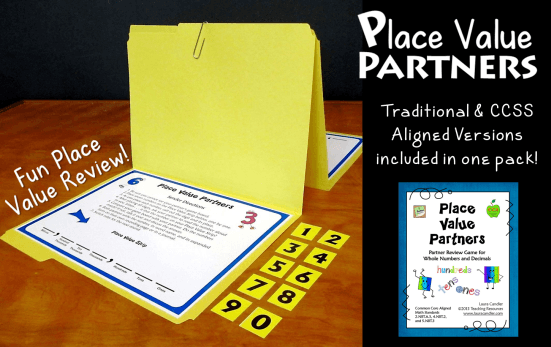 Bingo Showdown Decimal Review
CCSS 5.NBT.3 and 5.NBT.4.
Decimal Place Value Bingo Showdown is a variation of the classic Bingo game that can be used for whole group instruction, small guided math groups, cooperative learning teams, or in learning centers. What more can I say? It’s Bingo and kids love it!

Place Value Spinner Games
CCSS 4.NBT.2 and 4.NBT.3
Another game my students enjoyed was the Spin 4 Cash Place Value Review Game. In this activity, students practice word names and expanded forms using task cards and a spinner. When they get a correct answer, they may spin for a certain amount of “math cash.” I also created an international version called Spin 2 Win that awards tokens instead of cash.

I’m the Greatest – Comparing Numbers Game
CCSS 2.NBT.4, 4.NBT.2, 5.NBT.3
The final game I want to share with you is I’m the Greatest, a simple activity for comparing numbers. The teacher can play against the class, or students can play against each other in cooperative learning teams. In this game, players attempt to create the largest number by placing randomly-selected numbers on a game board. There’s a bit of luck involved, but in order to win, students have to be able to read word names and compare numbers accurately.

All four games are available individually or as a part of the Place Value Game Bundle. Even if you have already introduced place value concepts, these games make great review and practice activities throughout the year. You’ve heard that practice makes perfect, and that definitely applies to place value concepts. Plenty of place value practice is needed to make perfect!