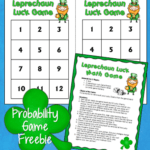 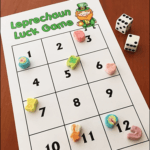 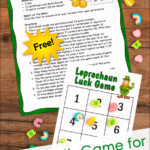 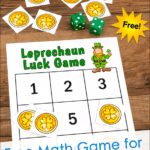 Looking for a fun math game for St. Patrick’s Day? You’re in luck! My free Leprechaun Luck Math Game makes it easy for kids to explore probability while playing an exciting game of chance. In order to win, players will need a bit of luck, but they’ll also discover that there’s more than luck involved in winning! If you’d like to use this game with your students, click here to grab your free copy of Leprechaun Luck.

If you want to make the game extra special for St. Patrick’s Day, give your students 12 colorful marshmallows from a box of Lucky Charms cereal to use as game pieces. Or you can print gold coins from the pattern in the freebie, or substitute other small objects like pennies, snap cubes, or paper clips. You’ll also need two dice for each game.  Pair students with a partner of similar abilities, and display the directions as you explain the rules. 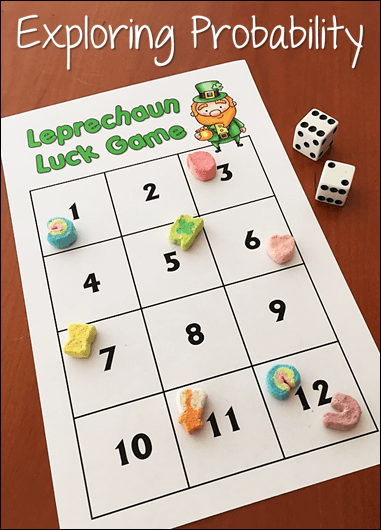 How to Play Leprechaun Luck

The rules of the game are easy, so your students might be fooled into thinking that it’s just a fun game for St. Patrick’s Day that has nothing to do with mathematics. However, the math magic starts to happen they play the game several times in a row! Your students will begin to realize that where they place their 12 game markers is extremely important because some numbers are luckier than others!

For example, you can’t get a sum of 1 from rolling two dice, so placing a game marker on 1 makes it impossible to win. After playing a few rounds,  they’ll also start to realize that the numbers in the middle are luckier than those at the top and bottom of the board.

As they play, encourage them to discuss their strategies and insights with their partners. If time allows, have them switch partners and play against another classmate. At the end of the class period, wrap up the activity with a discussion about which sums seemed to be rolled more often and why.

Hint: If they list all the sums they can get from every combination of two rolls, they’ll realize that some numbers have more possible combinations of addends. For example, there’s only one way to get a sum of 2, but you can get a sum of 7 by rolling 1 + 6, 2 + 5, and 3 + 4. Maybe that’s why 7 has always been considered to be a lucky number!

If discussions of mathematical probability are too advanced for your students, they can still get a lot out of playing Leprechaun Luck. The game encourages higher level thinking, and is highly engaging for students of all ages. Not only will they be having fun, they’ll be practicing basic addition skills, learning to follow directions, and learning how to be a good sport.

No matter what age your students are, they will love this game! Kim Arnold commented on this freebie and summed up her thoughts this way, “Dice AND Lucky Charms in the same game? The kids will think that’s lucky enough!” I couldn’t have said it better myself!

If your students enjoy playing Leprechaun Luck, but they need practice with multiplication facts, the Pirate’s Luck game is just what you need!

The rules are similar to the rules of Leprechaun Luck, but Pirate’s Luck has both addition and multiplication game boards with two levels of difficulty. It comes with digital and printable resources, and the game can be played any time of the year. A comprehensive teacher’s guide is included with lesson suggestions, the printable games, and links to the Google Slides versions of them. Click here to preview the entire PDF teacher’s guide. If you like what you see in the preview, you can find Pirate’s Luck here on TpT. 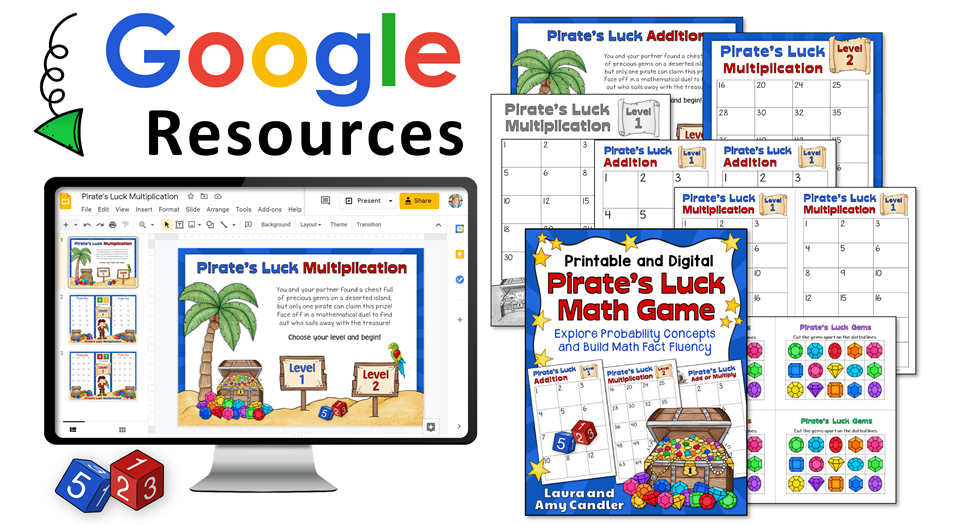