Do you like to play Scrabble? If so, imagine how much fun you’ll have teaching your students how to play! It’s fairly easy to set up a classroom tournament, and this event is sure to keep your students completely engaged during the last days of school. Even if you don’t want to set up a tournament, you can still teach Scrabble to your class as an educational game and a fun way to wrap up the year. To use the game in the classroom, you’ll need one Scrabble game for every four students.

How to Introduce Scrabble to Students

Before you actually start the tournament or allow students to play on their own, be sure to teach the rules of the game. Don’t assume that kids know how to play, even if they own a game board. Most kids today don’t seem to know the basic rules of the game, let alone the finer points. Oh, they’ll tell you they know how to play, but, trust me, they don’t! You can introduce the game by displaying the Scrabble Practice grid on a whiteboard or showing a real Scrabble board with a document camera. It’s not exactly like the real board, but it’s close enough for an introduction. 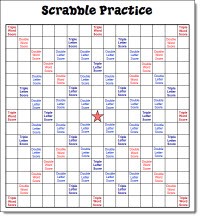 Draw out 7 letters for yourself and 7 letters for the class. Write the class letters in huge blocks on the board with the number values clearly shown. Play against the class play and write the words for each round directly on the board. Use this as an opportunity to clarify the rules of the game.

On the first day that you introduce the game, don’t worry about calculating the scores properly. However, before starting your tournament or letting them play alone, be sure to teach students how to keep score using the proper point values for each letter and the values on the board.

If you have the computer version of Scrabble, set up a projector and let your class play against the computer by working in cooperative learning teams. Students in teams can put their heads together to come up with a word to beat the computer. Call on each team to share their word and let the team with the best word come to the computer and play it. If you don’t have the computer game, plan for them to play a practice round before starting the actual tournament. 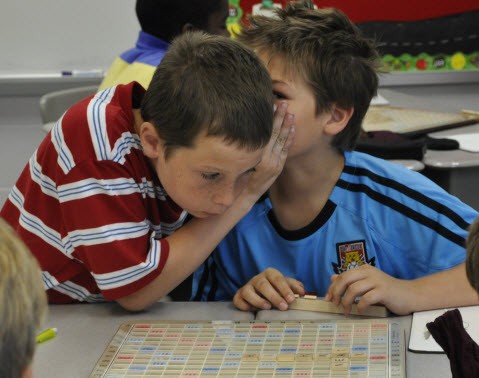 How to Host a Classroom Scrabble Tournament

When setting up my Scrabble tournament, I found it best to divide my class into pairs of students who competed against each other. I always paired students who had excellent word-building skills with students who needed some help. They were allowed to whisper and discuss their word choices together when playing. The photo above was taken several years ago and shows two of my students consulting about their Scrabble strategies!

The way I set up my tournament was to have students rotate to a different table each day for three days. I created a Scrabble Board Assignments seating chart to help me keep track of who went where each day. 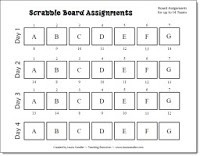 Be sure to allow plenty of time to introduce the game, and at 4 days for the actual tournament. My students loved learning to play Scrabble, and the tournament was a hit every year that I hosted one! I hope your students enjoy it as much as mine did!